It’s full steam ahead on construction of the largest infrastructure project in Queensland’s history.

Costing $5.4B and scheduled for completion in 2024, the development will feature a 10.2 km track from Dutton Park to Bowen Hills (including 5.9 km of twin tunnels running under the Brisbane River), four new underground stations (Boggo Road, Gabba, Albert and Roma Streets) and the refurbishment of eight existing above-ground stations in the CBD.

The enterprise is already injecting crucial millions into the economy each week, in part due to the thousands of jobs being generated during construction.  Its goal is to ultimately improve liveability for the entire region by enabling a turn-up- and-go transport system that will cater for South East Queensland’s burgeoning population well into the future. 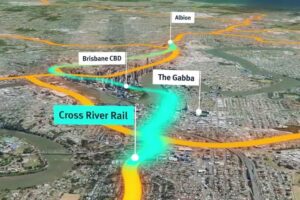 We have broken ground at our greenfield site. It's exciting times so stay tuned.

To comply with the latest update to AS5131 and to maintain our Construction Category 3 rating, we are also certified to AS3834.